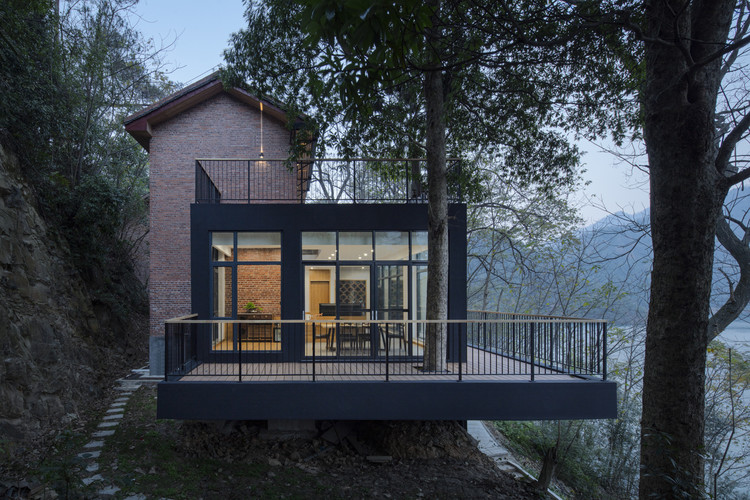 Present situation. The project is located in the Zhexi Reservoir, Anhua County, Hunan Province. The project was formerly a timber factory with a history of more than 60 years. In the past two decades, it was abandoned due to the decline of the timber company and became an idle facility in the countryside. In 2019, it was established by Anhua Meishan City Investment Group Co., Ltd. invested and transformed it into a supporting homestay along the lake ring of the Zhexi Reservoir Scenic Area. It hopes to revitalize the idle resources in rural areas through design and transformation, then promotes the revitalization of local villages and the development of tourism. The site consists of five vacant buildings, namely the office building (Building 1) of the original timber company, the restaurant (Building 2), the dormitory (Building 3 and 5), and the pigsty (Building 4). Due to the large construction area and limited cost, we intend to use the principles of low cost, minimal intervention, and making the best use of the situation to carry out renovation and utilization from the perspective of rational allocation of the renovation budget. According to the respective positional relationship, landscape conditions, and morphological characteristics of the five buildings, find their respective appropriate functional positioning.

Genius Loci. Focusing on buildings separately, the existing buildings unfold in a zigzag shape on the site, and the existing space experience is relatively monotonous; expanding the observation scope to the entire site, many tall dawn redwood trees on the site and the building together enclose a quiet, introverted courtyard with soft borders. The space enclosed by these tall trees is impressive. Therefore, we hope to use a corridor space to strengthen this introverted site temperament, so that more residents can perceive this introverted and quiet space atmosphere; in the center of the corridor, we set up a mirrored pool, hoping that through the reflection on the water surface, reveals the space above the courtyard for the residents and guides the residents’ sight upward to observe the tall and straight beauty of the tall dawn redwood.

The corridor system enriches the choice of traffic flow lines for residents and transforms the original monotonous straight-line streamline of the building complex into a more experiential return-shaped streamline. It relieves the interference of the one-shaped streamline on the functions along the way, relieves the traffic pressure of the trunk line, and maintains the privacy of the hotel guests. According to the current position of the dawn redwood trees in the site, the shape of the corridor is twisted and enclosed, forming several patios and yards of different shapes, bringing a richer and more interesting tour experience to the guests. And the horizontal extension of the corridor also strengthens the presence of the vertical form of the dawn redwood trees.

Waterfront Lighthouse. According to the on-site investigation, we found a collapsed house foundation near the water bank. After verification by the relevant personnel of the original timber company, it was confirmed that there was a house here, and this site has become a rare site with new construction conditions. Due to the poor road traffic conditions around the site, boating has become the most reasonable and interesting way to log into the peninsula. We hope that this waterside building will become the check-in lobby and water bar for the peninsula and become a landmark like a lighthouse. At the same time, it is also hoped that this building can provide a visual focus between the mountains and rivers for the visiting guests and create a sense of anticipation in the process of landing on the island.

Structure and Landscape. “Keep the original appearance as much as possible, and the area can only be increased but not reduced.” This is an important factor emphasized by the timber company and the owner in the early design communication. The original building is a brick-concrete structure. Due to the limitation of the room size of the original office building and the small bays and depths, we expanded an area along the façade to get rid of the limitation of the original structure and present a more open space appearance. The expanded area will maximize the introduction of natural outside views into the interior, creating a relaxing space with an outward view in each guest room.

Memories and stories. The lumber factory has experienced ups and downs in the past 60 years. The fence gates and tile murals of the site have all witnessed historical changes. Retaining the original elements of the site and activating the status quo at the least cost is the expectation of the client, and it is also an inevitable choice for a project with a low budget. After locating the site gates, walls, murals, and trees, we actively utilized these site elements in the subsequent design. Many fragments that were regarded by the construction party as “unreserved value” were almost demolished several times during the construction because of “causing trouble”. After repeated communication in the process, they were finally retained. We hope that when guests experience the renovated homestay, they can still capture the traces of people and events left on the site from the 1960s to the 1990s, and continue to tell the story of the site together with these traces.